GUNS in SOCIETY
SUICIDE AND FIREARMS 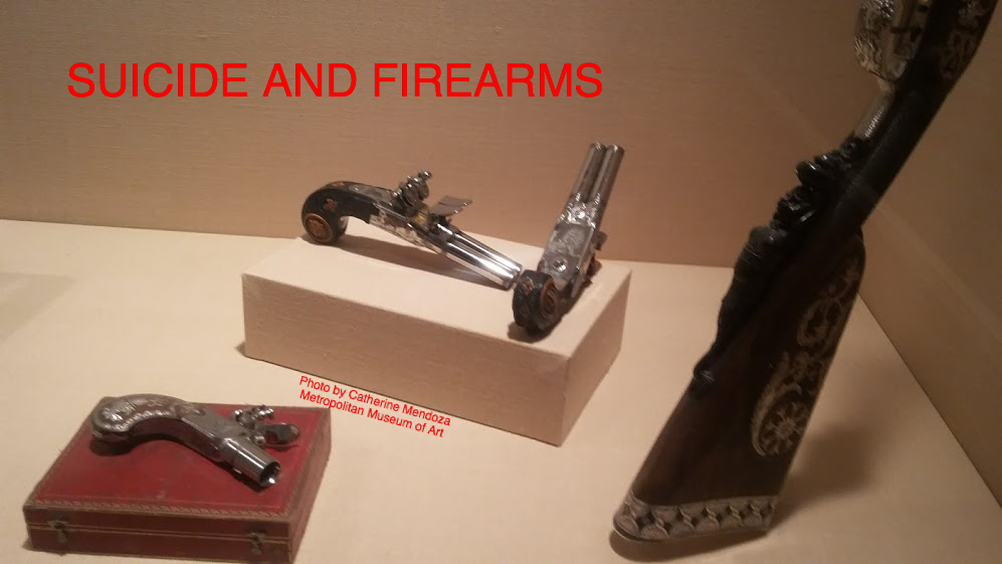 The World Health Organization (WHO) defines suicide as self-directed violence.
According to the WHO over 1 million people commit suicide everyday.
Suicide rates are rising across the U.S.
Gun suicide rank second in teen method of suicide cases.
WHY PEOPLE COMMIT SUICIDE?

Suicide accounts for more than two-third of firearms deaths in the United States. The fact that suicide rates are rising across the U.S. does not make suicide a new phenomenon. Despite this, it is often difficult to understand why some people cannot overcome disappointments and sorrow without suicidal thoughts..
Why does a good cry not release stress?
Why does a person not recognize the good in their lives?
Why there is no hope for the future?
It is especially hard if you were once in their place and overcame the urges to commit suicide. Suicidal thoughts are often diagnosed and categorized as a part of a larger set of behaviors such as "depression," "psychosis," or "manipulative behavior." While this diagnosis is a reasonable assumption for biological abnormalities, the absence of an indisputable medical diagnosis sidesteps the cause of suicide ideation. For a suicidal person, suicidal thoughts are an effective method of eliminating pain.

​Symptoms:
​
Mild depression is a mental state that happens at least once in most peoples lives and is often associated with situational sadness (divorce, death, lost of job). Short term depression usually last two weeks. However, some people may experience multiple episodes. A person with severe depression or clinical depression will exhibit any of the following symptoms: Despite the universality of episodes of mild depression across populations, chronic depression is not a normal part of growing up or growing old. A person with severe depression or clinical depression will exhibit at least five of the above mentioned symptoms. Untreated chronic depression interferes with daily activities. Short term depression does not include delusions, hallucinations and other forms of psychotic behavior. Suicide is one of the leading causes of death worldwide and is an important public health problem.

Suicide is Rarely Caused by a Single Factor.
In certain countries suicide is a secretive act. Emile Durkheim
In 1869 a sociologist by the name of Emile Durkheim researched the rate of suicide in France, England and Denmark. Durkheim argued that though suicide was a solitary act, the urge to commit suicide is linked to several social factors such as the kind of social cohesion found in a society as well a person's social, religious and occupational standing. Durkheim Findings
​"Suicide is a leading cause of death for Americans – and it’s a tragedy for families and communities across the country, " said CDC : Principal Deputy Director Anne Schuchat, M.D. 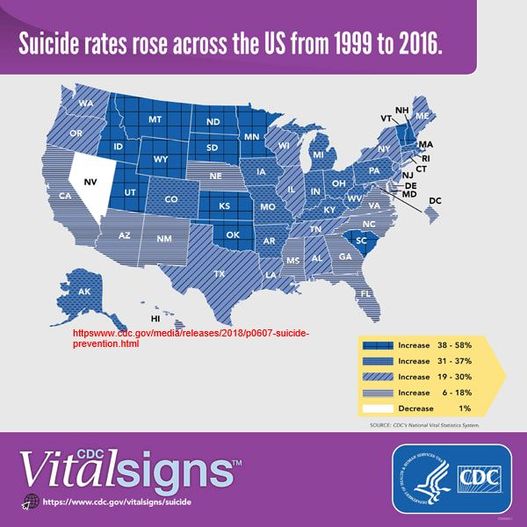 2018 CDC Report
Research done by the CDC, DOHMHM, and EVERYTOWN FOR GUN AND SAFETY indicates that suicide rates are rising in America. Suicide mortality varies across age, sex, race, and geography. What is especially worrying is that the reported ages of suicide are getting younger and younger. Self- inflicted injuries (firearms) are the fourth leading cause of death for 15-44 years old, and the sixth leading cause of ill-health and disability.​ 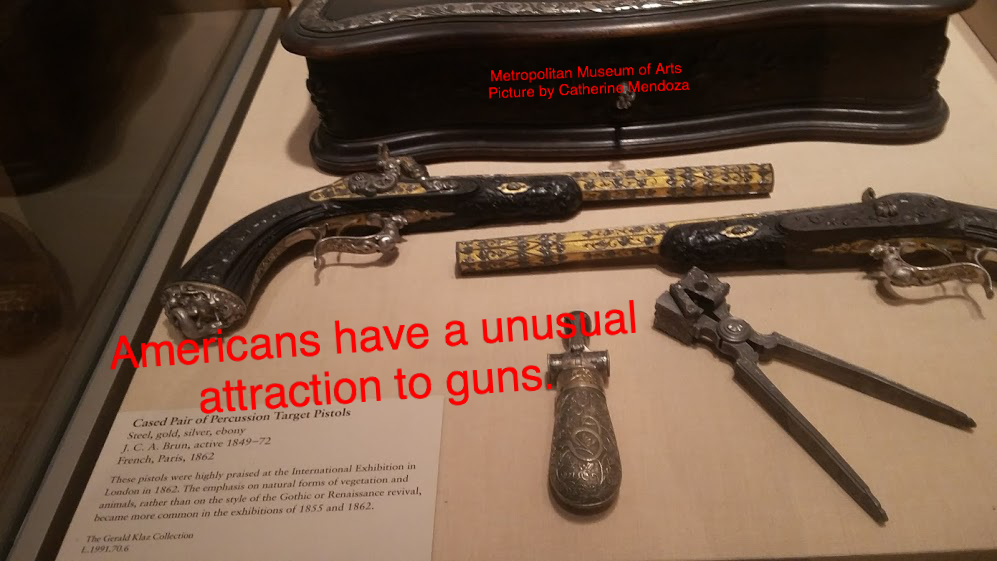 GUNS vs FIREARMS
Americans have a unusual attraction to firearms. ​
***There is a fundamental difference between a gun and a firearm.
Fact: all guns are firearms but not all firearms are guns.

Most US states laws define firearms as a device which utilizes an explosive charge (gunpowder) to fire a projectile. Air rifles and pistols, are called BB guns or pellet guns, but are not called "firearms," since they use compressed air or CO2, not gunpowder to propel the projectile.
​Gun is a broad term that is applied even to toys, which look like firearms, they are not.
*** All guns and firearms are deadly and dangerous when in the wrong hands.
The Second Amendment jurisprudence gives an individual protection for gun ownership.​ 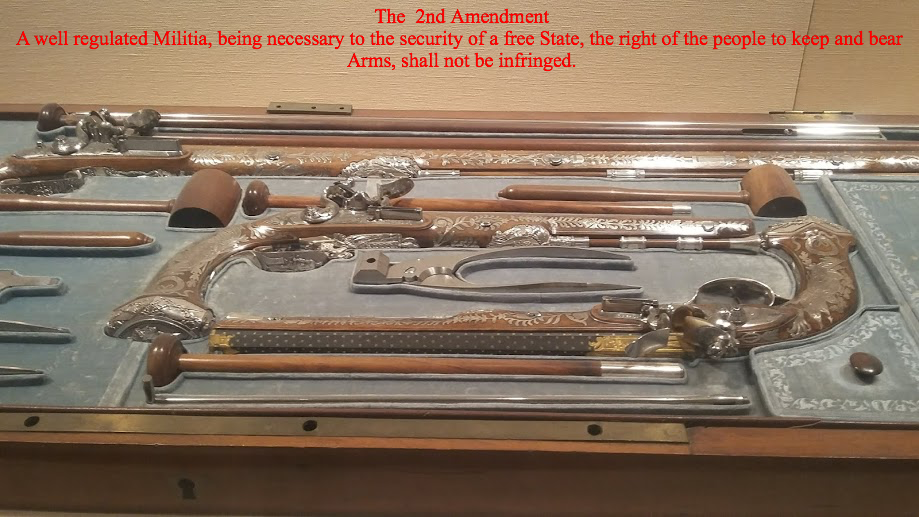 Gun suicide deaths account for over 60% of gun homicides.
Those who survived shared that it took about five minutes to retrieve the gun, load, and pull the trigger. Public health researchers view guns the most deadly of all method of suicide. Firearms are lethal because 86% of all attempts are successful. Firearms do not lead to suicide. However, it is an effective method often used by teenagers. Firearms suicide rank second in teen method of suicide cases. ​Studies show that suicide attempts occur within five to ten minutes after someone decides to kill themselves. Access to firearms makes the urge more immediate.
Presently, there is adequate professional assistance for personal, family, or work problem. Nevertheless, those in need of help often hesitate fearing their problem is so large that nothing could help. While there are others who are uncertain as to whether or not their concern is too small for them to seek help. Untreated chronic depression interferes with daily activities.
​
KNOWING WHEN TO SEEK HELP
Seek help when these symptoms persist

1. When old coping methods aren't working.
2 .When sadness outweighs happiness.
3. When a crisis or unexpected loss occurs.
4. When you sabotage yourself.
5. When a negative pattern unfolds
6.  When symptoms of depression develop.

It is time to reach out for assistance?

1. Seek professional help.
2. Choose the right therapist
3. Focus on the problems/issues.
4. Focus on feeling understood
5. Clear all privacy policies.
6. Have plan of action.
If gun suicide is a public health problem we need a global prevention plan.


Police officers​
Soldiers have higher rates of suicide.
Cure Violence
Cure Violence is the Health model for controlling and reducing violence within our communities. The Cure Violence Model is based on the World Health Organization (WHO) methods used to stop the transmission of deadly diseases. Cure Violence was founded by Gary Slutkin, M.D. The steps include
1) interrupting transmission of the disease,
2) reducing the risk of the highest risk,
3) changing community norms.
Cure Violence has succeeded in reducing gun suicide violence. The Cure Violence method is used by the Department of health and other organizations like Brownsville in Violence Out and CAMBA Violence Prevention.
Sensible gun laws reduce easy access to firearms.
Establishing a culture of gun safety reduces firearm access to youth and individuals. Especially those at risk of harming themselves or others. Holding the gun industry accountable would control the marketing and sales of guns and ammunition. Implementing mandatory training and licensing for owners as well as requiring safe and secure gun storage laws.
IMPORTANT ANNOUNCEMENT
If know is having thoughts of killing themselves and have access to a firearm.
PLEASE Call the hotline in your state it is free and confidential 24/7
If you are having thoughts of suicide
PLEASE Call the hotline in your state it is free and confidential 24/7​
SEEK ADVICE AND HELP
YOUR LIFE IS IRREPLACEABLE
​go to link for more info on - suicidepreventionlifeline.org
Call - 311
Or
1800-273-8255
​Text HOME to 741741 in US
Personal Testimony
This is my personal testimony but I would love to add other people testimonies. I would like this to be link by itself.
One Monday during recess Ann calming revealed the most shocking secret I had ever heard.
Hey, thank you for coming by Saturday night.” Ann leaned in and touched my right shoulder. “You saved my life.”
“ I was told that you were looking for me,” I shrugged.
“ You came at the right time.”
I ignored her, kept my eyes on my lunch.
“ I was contemplating killing myself, when you knocked on the door.”
My heart raced; I looked up but she looked away.
“I am tired of my mom's nagging.” she stood up and walked away.
Cannot remember the words which were followed. Do not recollect ever revisiting the conversation or relating the confession to an adult, family member or teacher. Reflecting on the past, I recall thanking God for using me. We lost touch with each other. Nevertheless, she grew up to be a wonderful mother and wife.
At fourteen, I knew that suicide was wrong. I was wrong I also knew that my friend was depress and talked of running away from home. Yet, I was not familiar with suicide prevention methods. My school and adults solution was not forthcoming. I barely knew CPR and nothing of Mental Health First Aid or suicide prevention. I was totally unprepared. Being a teenager is beautiful, yet complicated. Relationships are skewed. Responsibilities increase. Emotions are often ungovernable. Fitting in is dangerous and difficult. Many of my teenage friends voiced suicidal thoughts. None died, though a few did attempt suicide.

Focus group and survey
I conducted two focus groups with 8 teenager (Family members and friends 15 to 19 yrs). I asked the following Questions
ANSWERS
What would you do if you were told of a contagious condition that is silently erasing your neighborhood and mind? How to break the cycle of violence lying beneath the urge to commit suicide? When your brain needs a break what do you do? If suicide is not the answer what is?
I also conducted a small survey among friends and family members. (work, school, church, email, phone) spoke with 50 persons.
I kept the sample sizes for both focus groups and survey small because of the target age range. I only needed snap shots of the teenagers views and insights on suicide.
WORK CITED
1- http://www.who.int/violence_injury_prevention

Institute of Medicine (US) Committee on Pathophysiology and Prevention of Adolescent and Adult Suicide. Suicide Prevention and Intervention: Summary of a Workshop. Washington (DC): National Academies Press (US); 2001. FIREARM AVAILABILITY AND SUICIDE. Available from: https://www.ncbi.nlm.nih.gov/books/NBK223849/Von, B. J., Hauser, D., Nelsen, T., & In Peterson, C. (2014). Firearms for personal protection: Armed defense for the new gun owner.

Many Reasons Why we Shouldn't Worry That '13 Reasons Why’ is leading teen to suicide.-https://www.nydailynews.com/opinion/evidence-suggests-13-reasons-isn-teen-suicide-threat-article-1.3938958. Accessed 10/12/18