GUNS in SOCIETY
Racism and Bigotry
​Against Native Americans
The Second Amendment has been examined, debated, vilified, exalted, and defended countless times since 1791, and the battle continues. One unambiguous aspect in the right to bear arms is its inequitable application throughout the years. Since the birth of the nation, firearms in America have at times been a tool of control, discrimination, and even annihilation against “the other.” The history of gun laws in the United States demonstrates that legislation has been unjust and racist, preserving an atmosphere of white supremacy and leaving an indelible mark on society. The consequences of the Second Amendment to the Native American communities was devastating, resulting in the eradication of the vast majority of America's indigenous people. 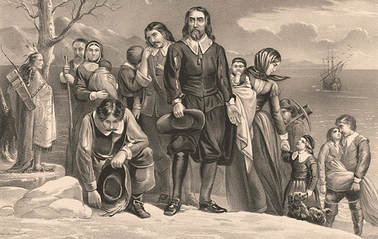 (“The landing of the Pilgrims at Plymouth, Mass. Dec. 22nd 1620,” n.d.) [2]
European Settlers
In the late-15th century, Europeans sailed west across the Atlantic Ocean seeking religious freedom and opportunity in the New World. Upon their arrival, they encountered North America’s original inhabitants with whom they engaged in trade, commerce, and cooperative farming. It was not long before differences in culture and religion, financial inequality, and the increasing demand for land by the settlers led to hostilities and violence.
The extinction of America’s Indigenous people began long before the ratification of the Second Amendment in 1791, but the right to bear arms officially allowed the decimation of Native Americans. In his 2013 paper, “The Origins of Genocide against Native Americans: Virginia in the Seventeenth Century,” author Alfred A. Cave wrote: 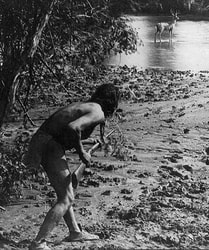 (“A noble buck in peril from a Sioux hunter,” c1908.) [5]
Guns and Trade
The most coveted trade items exported to Europe by settlers were furs, particularly beaver furs. The opportunity to trade with Europeans created greater competition and conflict among Native American communities. To facilitate their hunting, Europeans provided firearms and gunpowder and trained them in their use against each other.[4]
Hostilities Grow
The reasons for the deterioration of relations between European settlers and the native population of North America are wide-ranging. While some Europeans achieved success in their attempt to proselytize to Native Americans, the resistance to adopt their Christian faith and European customs created tension. In The First Prejudice: Religious Tolerance and Intolerance in Early America, John Corrigan, author of Part 1, Chapter 2, argues that Europeans came to believe that Native Americans were the ten lost tribes of Israel. Thus, believing they were Jewish in origin, they viewed them as destined for conversion to Christianity. Not all Europeans subscribed to this belief, but for those who did, they experienced the challenges as overwhelming and disheartening. [6] Once seen as “Amalekites,” who were the “archetypal enemy of the Jews,”[8] it became easier to view Native Americans as “the other.”

The failure of their once-successful trade agreements and the collapse of cooperative farming between the two populations also contributed to violent hostilities. Native Americans ultimately became the enemy of European settlers, who did not see them as equals. [9] When tens of thousands indigenous succumbed to diseases introduced by the settlers—diseases for which they did not have immunities—Europeans believed it was “the hand of God that fell upon them,” that caused their deaths. [10] Such beliefs justified their actions to dominate and subsequently annihilate America’s original inhabitants. ​
English Passed Laws to Prohibit Gun Ownership by Native Americans​
Hostilities and mistrust between settlers and Native Americans ultimately ended firearm trading with the English. In the Tidewater region of Virginia, Native Americans armed with guns came close to capturing English settlements in 1622. As a result, laws prohibiting the sale of weapons and gunpowder to the Indigenous people were implemented. Prohibitions notwithstanding, merchants were willing to sell or trade guns to Native Americans.[11] The presence of several European powers in North America provided additional options for trade. During the 17th Century, Native Americans traded with the Netherlands, thereby negating gun laws passed by the English.[12]

In her book, author Joyce Lee Malcolm documented the fact that English gun manufacturers produced inferior quality firearms in the 16th and 17th centuries.[13] The Dutch, meanwhile, traded superior quality firearms to the Native Americans.[14] In Thundersticks : Firearms and the Violent Transformation of Native America, author David Silverman documents how “firearms empowered Native Americans to pursue their interests and defend their political and economic autonomy over two centuries.”[15]

Gun ownership among Native Americans had a devastating impact within their own communities, as wars between them becoming more deadly. Federal and state governments exploited the situation by providing firearm to enable them to wage war against each other, thereby making them participants in their own extinction.[16]
Americans Declare Independence
​​Violent battles raged on as European settlers continued their encroachment and confiscation of land, at times even against Native Americans whom they converted to Christianity.[17] The Declaration of Independence signaled the impending westward expansion into Native American territory, which was previously prohibited by the Proclamation Act of 1763. At the conclusion of the Revolutionary War, treaties between England and Native Americans were null and void.[18] As Americans expanded westward, hostilities between settlers and Native Americans intensified.[19] “Savage wars,” coined by elitist Anglo-Americans during the French and Indian War to describe battles with native people, and “related to the militias of the Second Amendment,” would be fought mercilessly by Americans for years to come.[20] 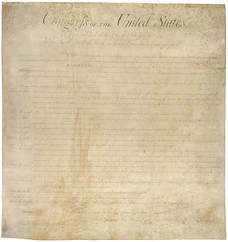 The Bill of Rights (Congress, 1789). [23]
The Second Amendment
The newly created United States of America did not trust Native Americans, who were referred to as “Blood Thirsty Savages, Heathen Red Savages, Merciless Savages and Barbarians,” by almost everyone, including the Founding Fathers.[24] In his article, “American Indians and the 2nd Amendment,” author Jamie K. Oxendine, of the Lumbee Tribe of North Carolina, editor of PowWows.com, and adjunct professor at the University of Toledo, rights of the four reasons set forth detailing the need for the Second Amendment: Three of the four reasons specifically referred to Native Americans and the dangers they perceived from that community. Professor Oxendine goes on to state that “Colonial Law from as early as the late-17th Century gave permission to ‘. . .kill savage Indians on sight and at will.’”[26] He also writes that each state passed regulations legalizing the murder of Native Americans; some laws were not amended until the 20th Century.[27] 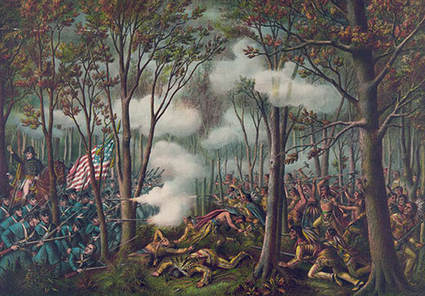 (“Battle of Tippecanoe,” c1889.) [30]
Americans Move Westward
Wars were frequent and deadly as Americans continued to move west, assuming ownership of land and displacing original inhabitants. Native Americans fought back, often with the firearms provided to them by the government. [28] Although smaller conflicts did occur later, the Wounded Knee Massacre in 1890 resulting in the death of 200 Sioux, is known to be the last war with Native Americans. The number of authorized wars against Native Americans is estimated at 1,500. After 300 hundred years of battles, “fewer than 238,000 indigenous people remained, a sharp decline from the estimated 5 million to 15 million living in North America when Columbus arrived in 1492.”[29] The government continued to encourage Native Americans to abandon their culture and assimilate into American culture and society. 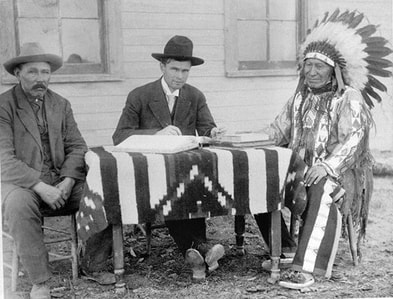 The study of America’s indigenous people reveals the gross misrepresentation provided in history books, movies, and television. A prime example is “scalp hunting.” The misconception that scalp hunting was solely a barbaric atrocity perpetuated by Native Americans against Americans is corrected by author Dunbar-Ortiz in her book. She reveals that scalp hunting was also a routine practice of Anglo settlers, for which they received financial rewards.[34] Native Americans did engage in acts of war against settlers, as much as any nation would when under attack.

Settlers regarded firearms as necessary for their defense from Native American attacks, but as scholars have documented, the indigenous people of America attacked in defense of their land and their people. While Native Americans outnumbered settlers, they lacked the political power to preserve their communities and their land.[35]

The most controversial and devasting action by the U.S. government against Native Americans was the Indian Removal Bill of 1830, which was supported by then-President Andrew Jackson. Over the next ten years, the U.S. Army forcefully moved 60,000 Native Americans to areas west of the Mississippi River.[36]

The Meriam Report
The Meriam Report, a 1928 study conducted by U.S. Indian Agent Henry R. Schoolcraft for the U.S. Congress, assessed the lives of Native Americans. “The report revealed to the government that its policies had oppressed Native Americans and destroyed their culture and society.”[37] It was a first step in accepting responsibility for the unconscionable destruction of America's indigenous people. 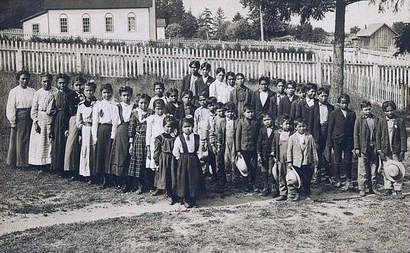