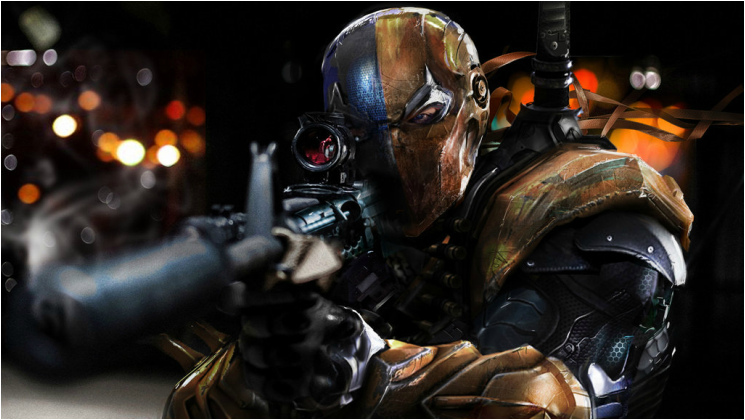 Guns have been inadvertenly advertised to the public through popular culture. Using platfroms such as music, video games, movies, media, and even some of today's so-called children's television programs, media creators peddle images of popular figures with firearms, such as Lady Gaga on the cover of Rolling Stone magazine below. While it is ultimately up to each individual to decide how he or she views firearms, pop culture plays a large role in shaping the way guns are represented.
​"POP" Culture
Characters
​​Creators of pop culture use iconic characters to attract their audience, often reaching out to young adults.  Using the images of The Joker, Harley Quinn, and G.I.JOE, along with other easily recognizable characters, pop culture has amassed an entire generation of followers. Seeing your favorite characters defending the world with firearms, might give audiences a little nudge to think that guns are an appropriate tool for ensuring the outcome of particular plots.  ​
Cinema
​There are many iconic scenes in films that include guns. Classic films such as Scarface or The Godfather trilogy, to newer films like Suicide Squad and Deadpool. Films are such a great way to advertise just about anything, with some awesome special effects and a little slow motion, guns appear to be absolutely effective tools. Even though we know what we are seeing is pure fiction, something in our minds just tells us that guns are super cool, seeing what they can do, the heavy damage it can cause, and the amount of training that goes into mastering a firearm, makes it seem like a form of art when seen on the glorious silver screen. With pop culture being the major force that it is today, it can shape they way people view topics such as guns, especialy when people are seeing firearms glorified or scrutinized  through several channels.
Literature
​One of pop cultures biggest media is literature. Through the forms of books, graphic novels, magzines, blogs, and many other types of literary outlets, people can express their views on a varity of topics. People can also read their favorite stories, keep up with the latest adventure of their heroes, and see what celeberties are up to. Guns also creep into popular literature. People may be reading a comic such as "The Punisher" who has a whole varity of firearms with which he kills his enemies to seek revenge. Or they could be reading "Batman" who refuses to use guns against his enemies beacuse his partents were killed by someone with a gun. Popular literature contributes characters and contexts that illuminate both sides of the conversation about guns, pro and con.
Music
​The music within Pop culture is extremly varied, but one style of music that is heavily influenced by the image of guns is called "Drill Rap."  Drill rap is a style of rap that contains lyrics about being a thug, killing people, and committing crimes.  Through this musical influence, we have a whole community which belives that this genre of rap is a lifestyle.  Below are a few music videos that are extremely explicit, viewer discretion advised. 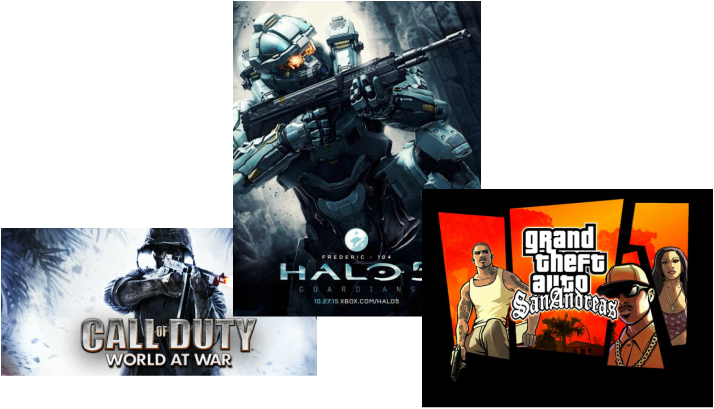 Video Games
​Video games are another significant medium for gun representation in pop culture. Games such as Call of Duty (COD), Halo, Destiny, and Grand Theft Auto (GTA) heavliy rely on gun violence. Most of these games have several instalments; some place you in situations where you have to kill people within the game, while others make you kill monsters or alians within the game. While the monster and alian killing seem like less of an issue, keep in mind that guns are still being used to take virtual lives. Many video games also feature live platforms, in which players face off against others online; these video confrontations often become aggresive and violent. Although these games are very fun to play, the imagery of guns is an ever present force, and a key factor in how these games are developed and played.
Hollywood Against Guns
In 2012 over 50 actors, actresses, and artists did a public service announcement to bring awareness about gun violence and to encourage the audience to sign a petition to change gun laws. Although it was a powerful and thought provoking PSA, it is said that about 75% of those in the video have taken roles that promote gun violence. So does Hollywood actually influence gun violence?
Articles
​Here are a few articles that show the kind of impact pop culture has had and is having on todays communites.

Below are news articles follwing the story of the Aurora, Colorado shooting where a man who has been labeled "The Joker" opened fire in a croweded movie theater.
http://www.newsday.com/news/nation/james-holmes-claimed-to-be-the-joker-nypd-commish-says-1.3849577
www.cnn.com/2013/07/19/us/colorado-theater-shooting-fast-facts/

​This article conatins information on the popular television show "Cops" and studies the kind of influence reality television is having its viewers.
​
www.nbclosangeles.com/news/local/Some-Celebrities-Demanding-Gun-Reform-Star-In-Violent-Films-367748701.html

Download File
Here are short articles that addresses how guns have made their way into pop culture and has sparked several insidents, such as mass shootings, becasue of it.
​www.bloomberg.com/view/articles/2014-05-27/when-gun-culture-becomes-pop-culture
entertainment.time.com/2012/12/20/what-we-should-be-thinking-about-violence-in-pop-culture-and-what-we-will-probably-do-instead/
​
​