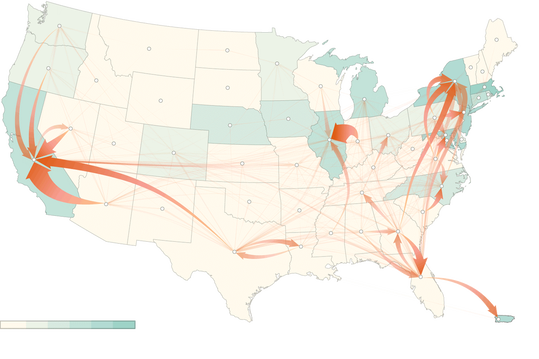 In a case study  Chicago(Illinois) and Indiana Flow of Guns in USA In 2014, more than 2500 shootings and 390 murders were recorded in Chicago adding to the state’s repute among the American states recording the highest rates of shootings and killings. In 2016, Chicago experienced a histrionic spike in the rates of violent crimes with over 760 homicides reported which constitutes a 42 percent upsurge from the previous year. Meanwhile, non-gun related crimes and homicides remained relatively constant (Cook & Laub, 2002). Furthermore, this surge in violence was concentrated with 50 percent of the crimes happening in just a handful of neighborhoods. According to Cook and Laub (2002), racial discrimination, wealth inequality and the failure of law enforcement to curb crimes have fueled the epidemic of gun violence. In a period of four years between 2010 and 2014 traceable guns used in Illinois that had been acquired from outside the state originated from Indiana (3,269) which is quite high compared to the 1,002 from Mississippi. In response to the high rates of gun crimes in Chicago, President Obama stated that the gun laws of the city were not the problem, but the fact that a larger fraction of the guns used by the criminals in the state emanated from the neighboring states whose gun laws were relaxed. Therefore, the current paper constitutes a gun markets case study of the flow of weapons between Chicago (Illinois) and Indiana.
​Illinois Gun Laws
In Illinois, gun laws regulate the possession, sale, as well as use of guns and ammunition within the state. To own a gun or ammunition legally, the residents of Illinois need to have a Firearm Owners Identification (FOID) card that is issued by the state police of Illinois to any applicant that meets the postulated requirements. However, the non-residents of Illinois who may possess a gun legally from their state of origin are exempted from such requirements. Furthermore, the state police of Illinois issue licenses for the concealed carry of hand firearms to applicants who meet the requirements of the law. The applicants are further required to be aged 21 and above and to have passed a 16-hour training session. Nonetheless, law enforcement agencies have the mandate to object the granting of a gun ownership license to an individual due to a reasonable suspicion that the applicant poses danger to others or self, a or threat to the safety of the public (State Gun Laws: Illinois). Such objections are deliberated by a Concealed Carry Licensing Review Board, that decides if the license should be issued or not on the basis of a preponderance of the evidence. In most areas, open carry is prohibited. A gun under transport by an individual without a concealed carry license must be unloaded and enclosed, or disassembled into a nun-functional state that is not immediately accessible.
In relation to private sales, gun vendors are required to verify the FOID card of the buyer and keep the records of the transaction for a period of not less than 10 years. In the case where guns get stolen or lost, the laws dictate that such loss or theft be reported to the police (Cook, Harris, Ludwig, & Pollack, 2014). On purchase of a gun, a buyer has to wait for a period of 72 hours before taking possession of the firearm. However, the ownership of suppressors, short-barreled shotguns, as wells as automatic firearms is prohibited. Illinois does not regulate or license gun dealers, require gun registration, limit the number of guns that can be sold at a time or demand background checks on private sales that are not conducted at gun shows 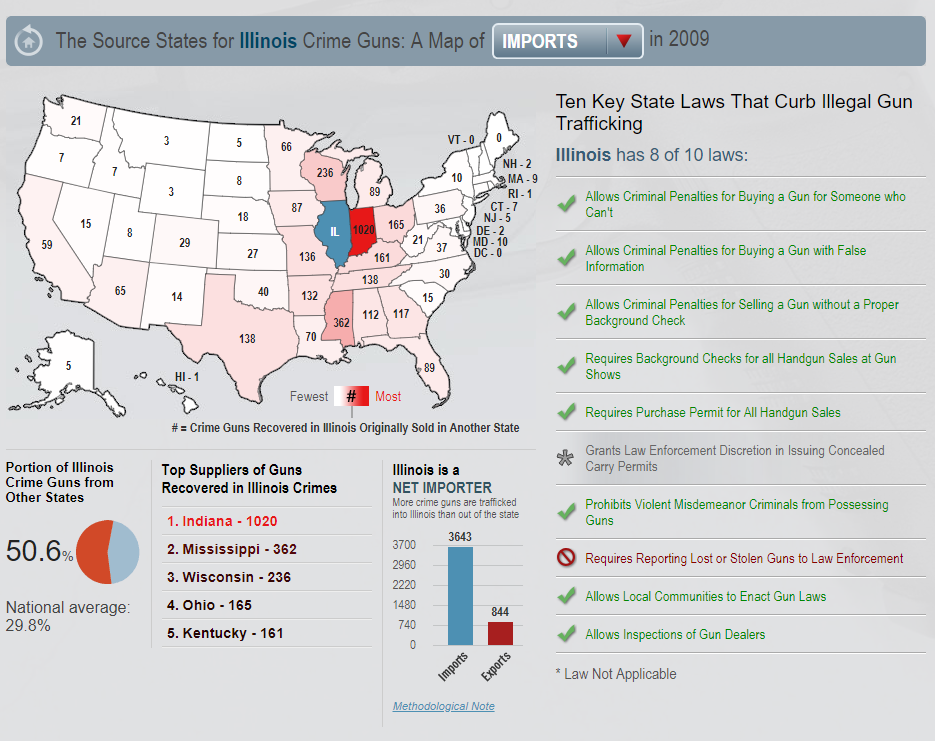 ​Indiana Gun Laws
The gun laws of Indiana demand a license for the carrying of handguns in general, even though there are a number of exceptions. Whether concealed or open carry the regulations do not explicitly specify, hence the license is a requirement for open, transport in a car, or concealed carry unless exempted by one of the exceptions. A license is not a necessity if the gun is carried on the property regardless of whether it is owned, leased, legally controlled, or rented by the carrier. Such applies to the case of a gun carried on the property of another person’s legally controlled property if permission has been granted (Cook, Harris, Ludwig, & Pollack, 2014). Therefore, the gun laws allow the issuance of a license to carry to both the residents and non-residents. Two types of license are available which include a limited term and unlimited lifetime license. Non-residents are only allowed to obtain the four-year limited license and are usually required to possess property or business in Indiana. Individuals in the military stationed in the state are allowed to obtain the lifetime license. In addition, applicants need to be 18 years and above where the Indiana state remains a “Shall Issue” state. 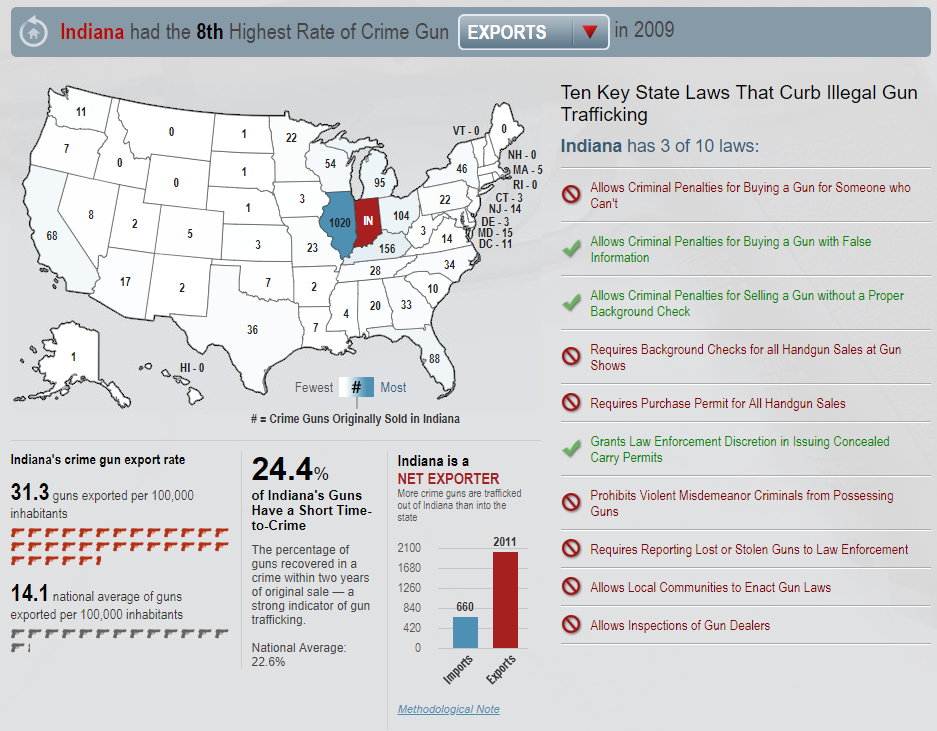 ​Gun Types and Brands
A study conducted by the Chicago police and the Bureau of Alcohol, Tobacco, Firearms, and Explosives provides a detailed picture of the manner in which guns used in crimes flow into the state. However, little has been understood in relation to the types of firearms that are specifically favored by criminal gangs. Criminals opt for semiautomatic guns as well as revolvers and largely look for cheap junk guns. Therefore, Cook, Harris, Ludwig, and Pollack (2014), in their study established that Smith and Wesson constituted the top crime gun manufacturer in Chicago. Several years after the company’s rocky safety initiative, Smith & Wesson has become the leading producer of guns used in crimes. Four of the company’s guns hold spots among the 20 guns that a recovered most frequently by the police more than any other brands and is generally the most famous gun producer with a total of 614 guns seized in 2014 (Knight, 2013). Nonetheless, 9MM handguns have become the new gun favored by criminals. Recorded homicides in Chicago constitute over 80 percent of the total homicides committed by use of a gun. In this manner, Knight (2013), established that the new weapons favored by criminals and gangs were 9MM semiautomatic handguns which were followed by .40 caliber and .45 caliber semiautomatic. 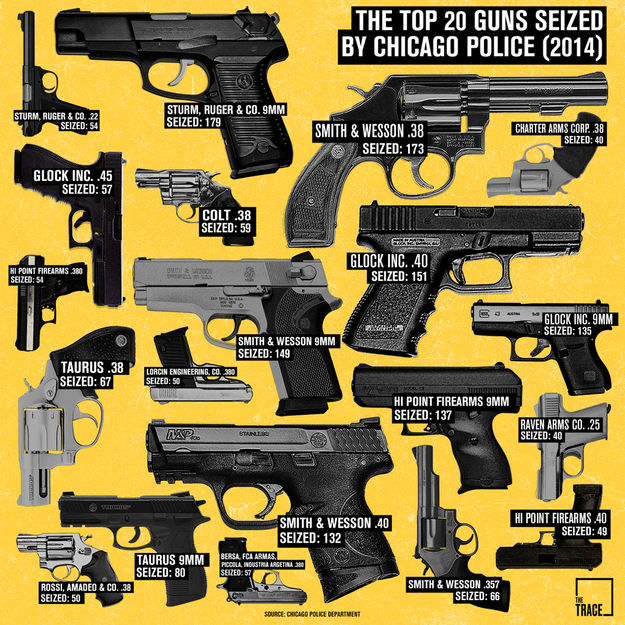 ​Guns constitute very durable goods that can last for many years. Therefore, if allowed into the black market by means of untoward sellers or lax laws, they stay in circulation for many decades. Research indicates that crime guns that were bought by gang members and criminals tend to be 12.6 years old on average (Knight, 2013). In Chicago, the number of non-gang homicides decreased in the period between 1991 and 2001 while gangland disputes up surged from 15 percent to 30 percent. Furthermore, according to Ludwig (1998), gang-related shootings are predominantly contagious frequently inciting repetitive and retaliatory gun violence. 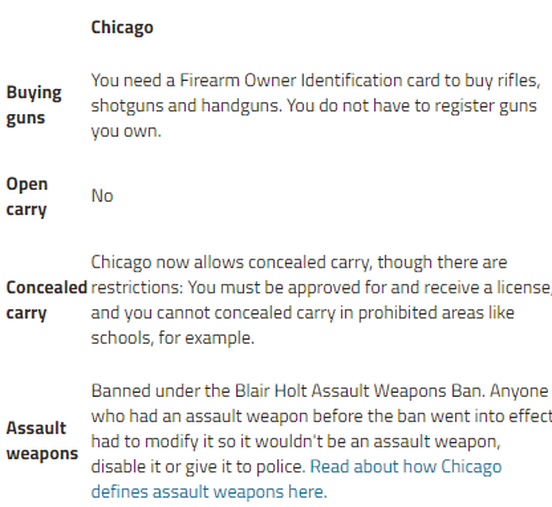 ​Conflicting Issues
Gun violence issues such as murder, homicides, and assaults constitute an extremely byzantine and varied issue across the laws of states and local culture. Various states back the notion of gun regulations as a necessary measure in the prevention and reduction of gun homicides, yet various other states assume an opposing stance. According to Knight (2013), the chief of ATF’s violent crime and intelligent division compared trafficked firearms to cockroaches in an apartment complex. If the problem is not comprehensively handled in all the affected areas, the infestation will still continue.
According to Siegel, Ross, and King (2013), many of the guns recovered in Chicago were bought in Indiana which abuts the eastern border of the city. The weapon purchased from Indiana constituted more the percent of the guns recovered which is by far more than the 9 percent that was purchased from Wisconsin and Mississippi. Such trends are not exclusive to Chicago but have been observed in cities with stringent weapon regulations. Basically, states whose gun regulations are lax constitute the source of the numerous ones that are used by criminals in homicides, assaults, and murders. This trend has been demonstrated by the report from the BATFE constituting statewide data of the recovered guns. The data that covers 2016 reveals the pattern where states with less strict weapon regulations form the source for crime-related guns in the states with more stringent regulations. Therefore, Chicago still faces the undeniable challenge of gun violence and most of the weapons involved in the crimes come from Indiana and dealers in the state. However, this problem cannot be blamed on the gun violence laws of Chicago, otherwise, it would be a misunderstanding of the national economics at play. Inadvertently, Trump has appeared to undercut his own point. To lessen the number of guns involved in Chicago crimes, it can be argued that there is need to implement stricter gun regulations throughout the nation to reduce the number of guns that flow into Illinois from Indiana. 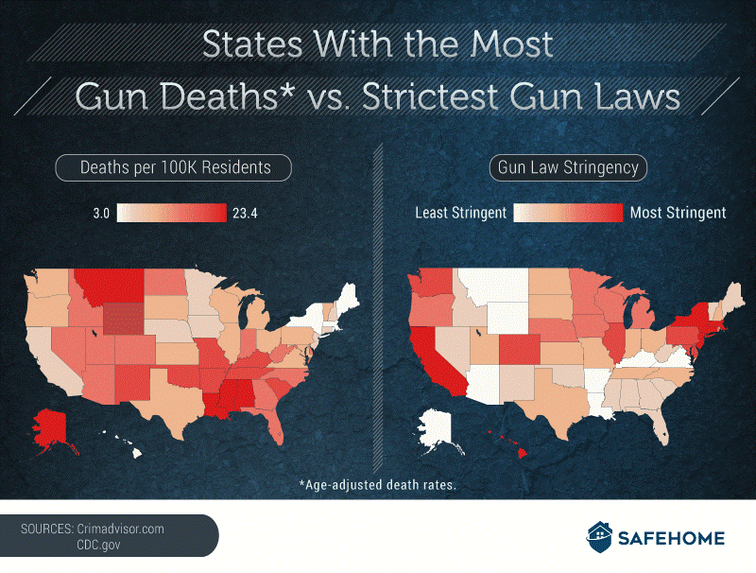