FACT 1: Children and young adults (24 years of age and under) constitute 38% of all firearm deaths and non-fatal injuries.

FACT 2: In the United States, over 1.69 million kids age 18 and under are living in households with loaded and unlocked firearms.
Guns and Our Younger Generation.
If you read the newspaper and/or turned on the television to see the news, you may have questioned to yourself what is this world coming to and begin to think whether our schools and neighborhoods are a safe place for our children. Our youth are faced with an ever-growing problem of gun violence. However, violent behaviors start from within the environment where children have been exposed too. Household, poor communities and schools as well have put children at risk.
Are our children raised be infatuated with guns?

Education on gun safety should begin early. As I began my research on youth and guns, I started to come across different images with children and guns. All of the picture that showed African American youth all seemed to be either affliated with a gang or just being a product of you environment. proverty and low income neighborhoods tend to have the highest crime rate, regardless of whether they are predominantly Black or white. But I think black neighborhood are much more likely to be highly disadvantaged than the white neighmoerhoods. Major of the images with european children in the picture were being trained on how to use or shoot a gun. I think this is a big problem where this difference is in our communities.
​ 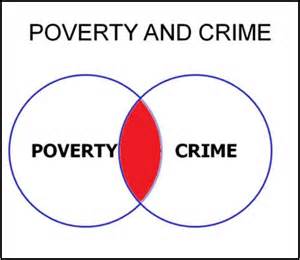 Some of the thoughts on guns... 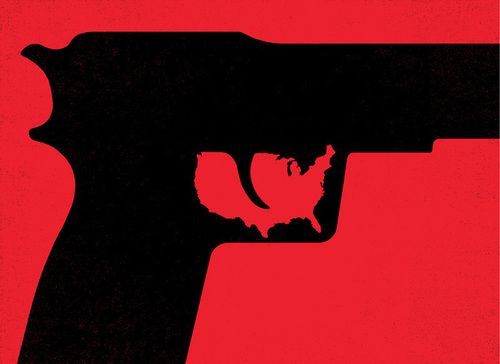 Children have been victims of gun related injuries. So far this year (2017) there has been a total of 1,300 gun related injuries resulting in injury or death ages 0-17. Firearm deaths has surpassed motor vehicles as the number one leading cause of trauma death. Since 1999, firearm injury has resulted in deaths of more than 35,000 children  ( ages 0-19).Young people are the primary victims of accidental injury or death. 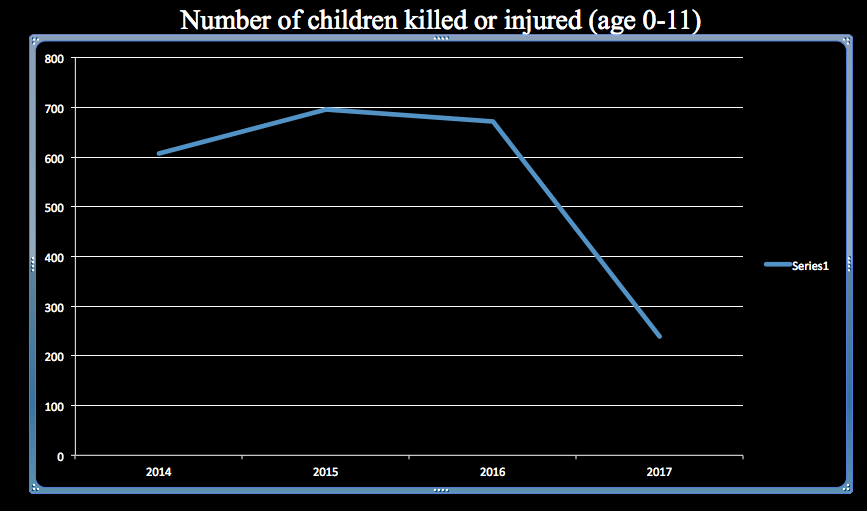 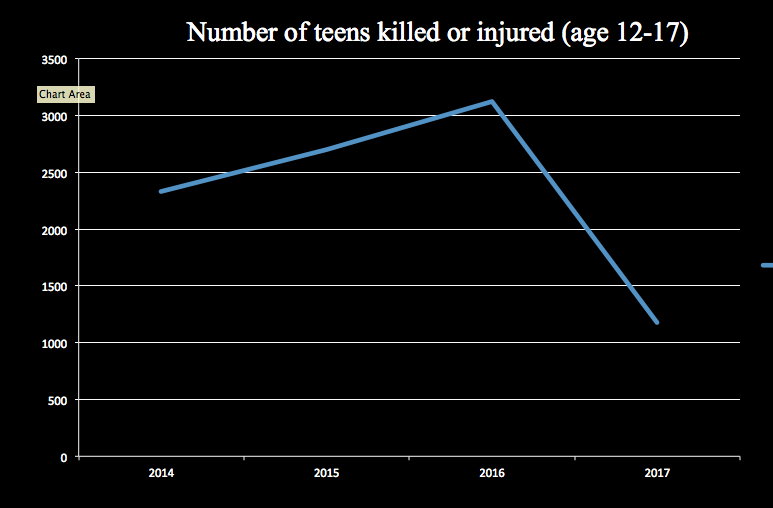 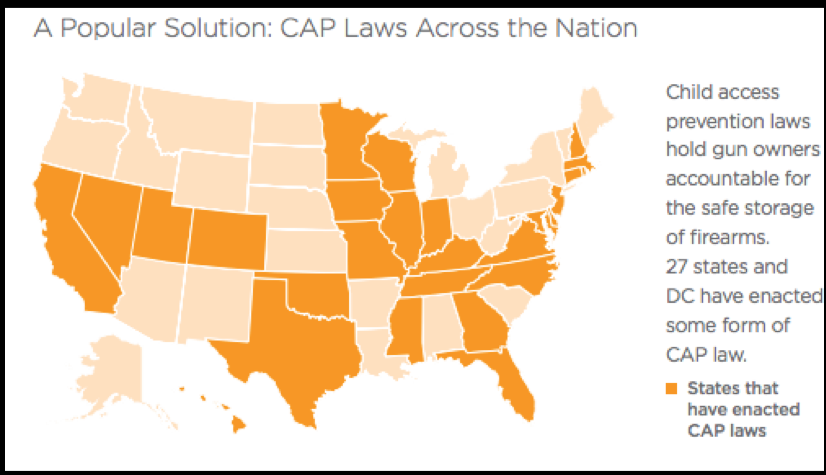 Gun- related accidents, suicides, and deaths was at an all time high during the 1990’s and early 2000’s. Child access laws was introduced in attempt to bring down the number.
Child access prevention laws charge the gun owner with criminal liability on those who give unsupervised access to firearms. Several states have enacted laws that protect children from firearms. The goal is to limit the exposure of firearm to children.  As well as reducing gun-related suicides, accidents, and crime among children.
The CAP  laws also encourages parents to keep firearms away from children.
States that have passed CAP laws have seen a a decrease in unintentional firearm injury. 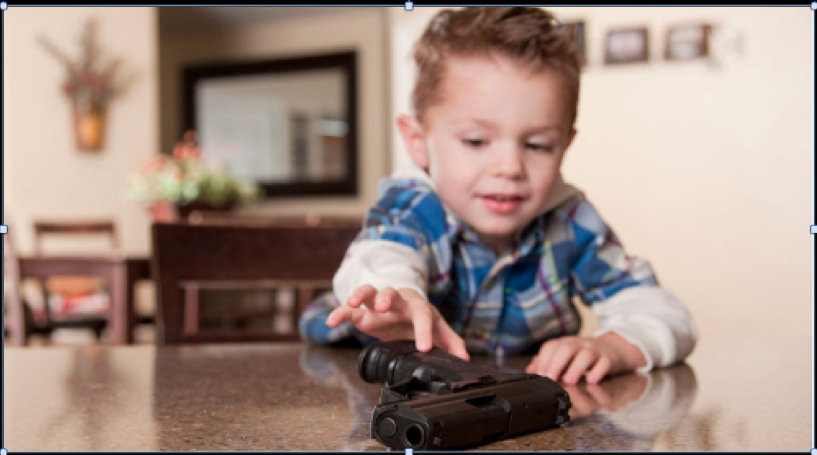 ​•In order to bring down the number of accidental firearm death and injury, the laws  have to change. Children and teens are dying because of the lack of firearm laws.
•Although several states have enforced child access prevention laws, many states such as  New York, Washington, Oregon,  Philadelphia, and  Ohio have not.
• Massachusetts is currently the only state where a law says that firearms must be kept locked. 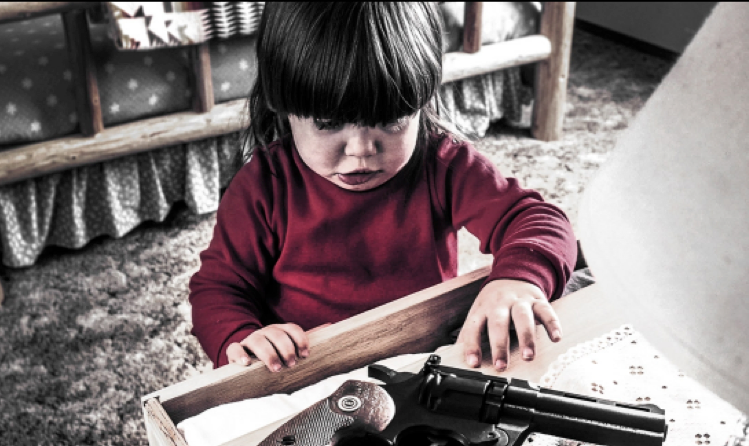 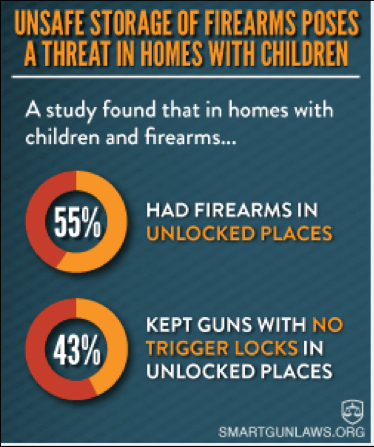 Children are more likely to be a victims of firearm death or injury when there is a firearm in a household. When there is a firearm in a household- it should be kept in a locked place and have a child safety lock. The picture above shows high the percentage of firearms kept in unlocked places in homes with children.
The objective of the survey below was to get a sense of peoples' opinion among guns laws, and their view towards the impact guns have on children and schools. 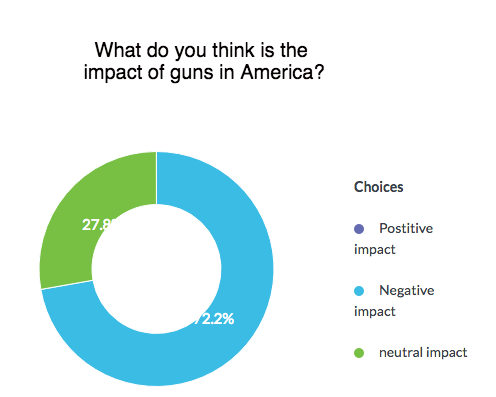 The pie chart above shows a total of 72.2% of people viewing the impact guns have in America as a negative one. Not one person answered the question by saying guns have a positive impact. 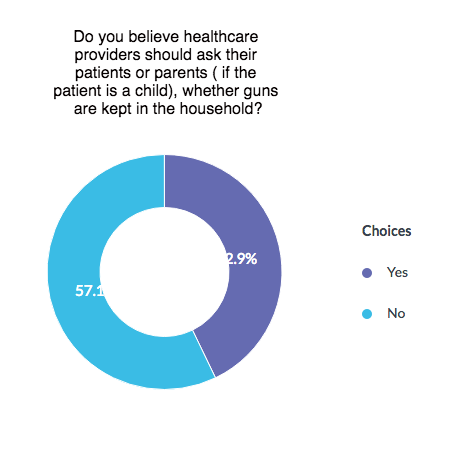 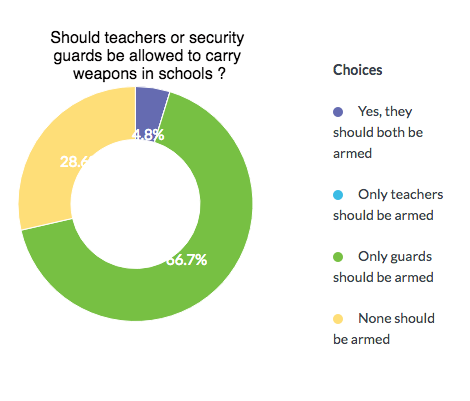 More than half of the people who participated in the survey agreed that school guards should be armed. This may be a result of the many school shootings that have taken place in recent years. A small percentage of 4.8% agreed that both teachers and guards should be armed. Recent school shootings in Sandy Hook and San Bernardino have made Americans question if arming school guards and teacher is the right move to make. 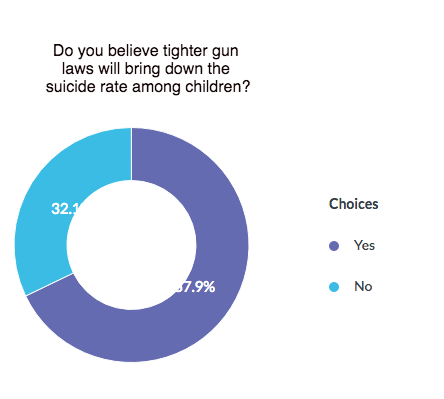 67.9% of the people who participated in the survey believe that tighter gun laws will indeed bring down the suicide rate among children. 32.1% believe that the suicide rate will not decrease with tighter gun laws. Gun laws protecting children can bring down the suicide rate. States who have Child access law protection have seen decrease in both suicides and firearm injury among children and teens.
​•Suicide is the 3rd leading cause of death among young adults ( ages 10 to 24 years)
•Firearms were used in 49% of completed suicides in children ages 10 to 19
•In youth suicides where a firearm was used, 95.3 % resulted in death 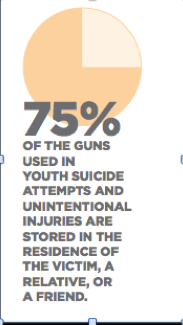 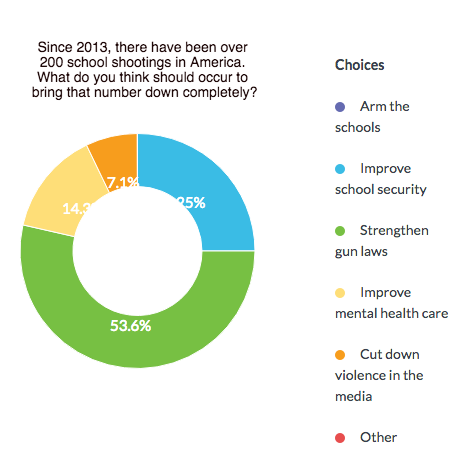 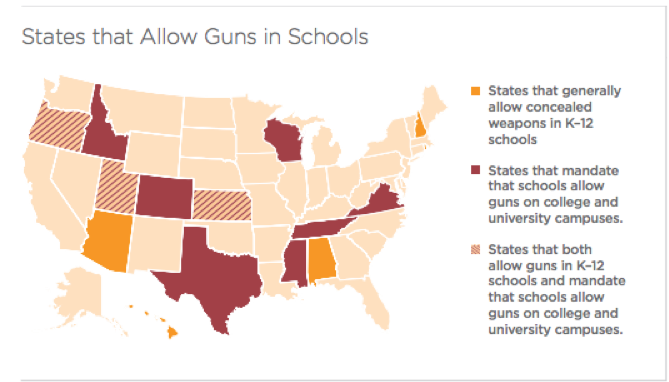