Science Fiction and The Evolution of the Gun

Aiming at the Future

Due to this intertwining of human destiny and gun development, any speculation on the future must then also speculate on the weapons we will develop and use in future wars. While not all SF considers the future, there is an entire wing of SF literature, films, and television shows that focus on the future of war. Future War SF imagines what conflicts humanity will face in the years to come and consequentially must also imagine what weapons will be developed to meet the circumstances of a future war.  ​

There are thousands of examples of Future War SF stories, but some stand out as clear examples of the genre. The War of The Worlds, and Starship Troopers, are two well-known and influential works of SF that depict future wars. These novels have influenced other works of SF, the ways we think about the future, and the technology that we use.
The War of the Worlds
Starship Troopers
In SF the future is open to interpretation and limitless possibilities. The circumstances of future wars vary from story to story with some set hundreds, thousands, or even millions of years into the future. The combatants of future wars can be anything from human beings fighting each other in national conflicts (World War 3 is an often-imagined future war) to battles with alien races throughout the galaxy. The Terminator and Matrix film franchises contemplate the idea of humanity at war with our own creations, depicting future wars with Artificial Intelligences (AI) and robotic armies. Anything goes in future war SF. David N. Samuelson describes the wide ranging variety of future war circumstances and settings as being typical to the SF genre stating that, “its formulas are multiple and various, ranging from myth to mathematics… few readers would limit SF to any particular time, place, or type of action.”[1] This wide ranging net of possibilities in setting and situation makes it possible for SF authors to imagine the wide ranging potential of technology, and to stretch that potential into new forms of transportation, communication, and weaponry

Future war SF in particular expands the feedback loop of inventions created to meet contemporary needs, by forcing authors (and readers) to consider inventions that may not be technologically possible now but could be developed as humanity progresses. ​SF author Kim Stanley Robinson has described the SF genre as "the realism of our time. It describes the present in the way a skeet shooter targets a clay pigeon, aiming a bit ahead of the moment to reveal what is not yet present but is already having an impact."[7] Robinson's metaphor can be applied to the effect that SF has on the technological imagination. SF future technology effects the present by aiming at (and imagining) the weapons technology just ahead of the guns we have today
What then are the weapons imagined in Future War SF?
From the Heat-Ray to the Death Star: The Evolution of the Death Ray
Description of the Martian Heat-Ray ― From The War of the Worlds (1898):

​It is still a matter of wonder how the Martians are able to slay men so swiftly and so silently. Many think that in some way they are able to generate an intense heat in a chamber of practically absolute non-conductivity. This intense heat they project in a parallel beam against any object they choose, by means of a polished parabolic mirror of unknown composition, much as the parabolic mirror of a lighthouse projects a beam of light. But no one has absolutely proved these details. However it is done, it is certain that a beam of heat is the essence of the matter. Heat, and invisible, instead of visible, light. Whatever is combustible flashes into flame at its touch, lead runs like water, it softens iron, cracks and melts glass. [8]
World War 1 saw an uptick in worry over future wars, as humanity began to realize the increasing scale of devastation caused by weapons of war due to technological developments. The aftermath of World War 1 and the onset of World War 2 saw the beginning of the search for "death ray", a weapon of mass destruction unlike any the world had seen before. Historian William J. Fanning notes how during this period "articles in newspapers, magazines, professional journals, and books began to appear that warned of a new conflict in which airpower, poison gas, disease germs, and exotic weapons such as death rays would result in the destruction, or near destruction, of civilization." [9]

​​The earliest fictional example of a death ray came from H.G. Wells' War of the Worlds. In the novel Wells describes the Martian "Heat-Ray" a weapon of power that can burn through and destroy anything put before it. The Martian weapon is impervious to human guns, cannons, and bombs, and with it the Martian force is able to quickly subdue human resistance. ​
Despite all of the failed experiments and hoaxes, research and development with Death Ray technology continued throughout both World Wars and beyond. SF has certainly worked to keep the Death Ray in the popular imagination by continuing to produce fictional weapons of mass destruction. The emergence of laser technology in the 1960’s quickly drew the attention of weapons engineers in the military and the imaginations of authors in SF alike. Soon after, laser-like weapons emerged as the phaser guns of Star Trek to the Death Star of Star Wars. While most of the practical applications of laser technology is innocuous (lasers are a silent part of everyday life, from store scanners to medical equipment) they are nonetheless still associated with weapons, mostly because of their use in SF.

​ David Seidel describes the trajectory of laser experimentation noting that, “the military research and development programs built upon the laser sought to exploit the coherence and directionality of laser beams, as well as their intensity, for detection, ranging, guidance weaponry. Some applications, like optical radar, were obvious. Others, like laser sidearms, owed more to science fiction than to science” [10]. To this day lasers still straddle the line between SF weapon and real-world technology. 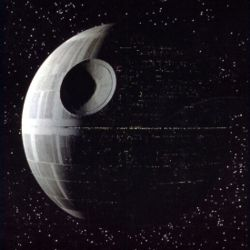 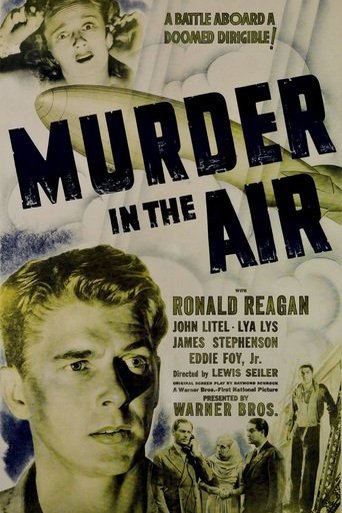 Fig 18.
That's not a moon, its a Death Ray! The Death Star weapon of the Star Wars universe is a death ray with the ability to destroy a whole planet remotely from space. Star Wars became emblematic of Ronald Reagan's Strategic Defense Initiative which proposed "a network of orbiting lasers able to intercept enemy missiles." [11]  The project became known as "Star Wars." Reagan had a unique relationship with SF weaponry, having himself starred in  Murder in the Air (1940) a movie about a death ray like weapon.
SF plays a role in bringing technology such as the Heat-Ray into reality. David Kirby theorizes that SF film and television in particular are central to making an impossible technology seem plausible. He writes, "Speculative scenarios represent highly implausible and impractical situations and technologies... so that they look possible within a film's narrative. They make these technologies look plausible... conveying to audiences that these fictional technologies can and should exist in the real world." [14] We can imagine a ray-gun because we have seen them being used. Furthermore, we can imagine a ray-gun as a real weapon that is scientifically inevitable because they are part of the landscape of our collective image of the future, thanks to SF. Weapons technology such as the death rays and laser guns depend on works of SF authors (like H.G. Wells) to make a theoretical technology seem realistic and worthy of scientific research and development.  ​

From Powered Armor to Iron Man: The Evolution of Military Exoskeletons

Long after the death of H.G. Wells in 1946, SF authors such as Robert Heinlein kept weapons that were previously dismissed as being beyond the realms of human capability alive in both the fictional world and in the realm of scientific research and development. Written over half a century after the War of the Worlds, Robert Heinlein's Starship Troopers has been just as impactful in the world of military technology and even in the minds of military personnel. SF author Charles Gannon describes the novel's importance and influence stating, "arguably, in terms of pertinent narrative content, publication history, and plentiful technologically significant 'prognostications’ no future war text can rival Robert A. Heinlein’s 1959 novel Starship Troopers. With considerable accuracy, Starship Troopers graphically and specifically anticipated personal military equipment and weapons that are the equivalent of (or still well beyond) today’s most advanced systems." [15] The influence of Starship Troopers is still being seen in the world of SF and in the development of military technology.
Heinlein’s influence was not limited to the SF community. Starship Troopers, with its battle heavy plot and hawkish perspective is a favorite among military groups. Heinlein was a member of the armed forces himself having served as a naval officer during the second world war. Charles Gannon notes on the connection between Heinlein’s military career and his writing:
Description of Military Infantry Helmet Displays― from Starship Troopers (1959):
[The display] is a very convenient arrangement; you can flip through your several types of radar displays quicker than you can change channels to avoid a commercial—catch a range & bearing, locate your boss, check your flank men. [16]

Fig 32.
Recent years have seen the debut of many exoskeleton prototypes, some of which are being developed for medical purposes and to aid veterans with limited mobility after being wounded in combat. The XOS 2 however, is a military exoskeleton. Much like Heinlein's powered armor suit, the XOS 2 is meant to enhance the strength and durability of soldiers in the field. The debut of the XOS 2  was timed to line up with DVD release of Iron Man 2, perhaps as an homage to the SF origins of the exoskeleton. [21]
​

Scientists, engineers, military personnel, and SF authors are not mutually exclusive. Robert Heinlein was a naval officer and an aeronautical engineer before he began writing an publishing works of SF. In 2007 a group of SF authors created the not-for-profit think-tank SIGMA to offer "futurism consulting to the United States government and appropriate NGOs." [22] These authors offer their expertise based on both their work within the SF genre, and their experience in careers in the fields of science, engineering, technology, the government and the military.

Fig 38.
SIGMA sits in the intersection of SF, government/military policy, and technological development. These authors play multiple roles and exert multiple influences in the development of the future.
Of course not all SF authors have side careers in research and development, but they can still exert influence on current and future trends in weapons technology. The growing popularity of SF as a genre expands the influence that SF authors can have on the future. Popular SF has and will continue to shape the collective perceptions of the future. The SF genre fills the vacuum of space that the near and distant future represent. Current (and future) weapons developers have grown up within that vacuum and have been shaped by all of the possible futures that SF puts forward. Even as we approach the technology imagined by Heinlein and Wells, new SF authors are busy extrapolating, speculating and transforming the technology and weapons of the far future.